← Back to news index 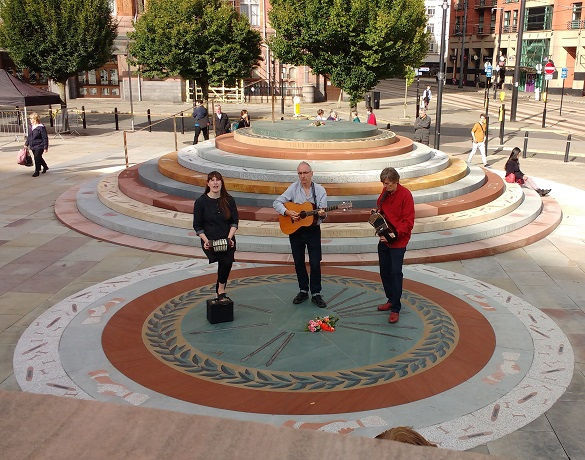 2019 is the bicentennial year of the ‘Peterloo Massacre’ in Manchester, and together with Brian Peters and Laura Smyth, we have been performing our show, ‘The Road to Peterloo’, since June.

On 16 August 1819 it’s estimated that over 60,000 people from Manchester and the surrounding towns and villages gathered on St Peter’s Field to listen to Henry ‘Orator’ Hunt campaigning for universal male suffrage and parliamentary reform. At that time Manchester had no MP’s. It was a legal and peaceful demonstration with families wearing their Sunday best. What followed is documented in Mike Leigh’s film ‘Peterloo’, released last year, when the magistrates, in a panic, gave orders to The Manchester Yeomanry to arrest Hunt and disperse the crowd. They were a drunken, ill-disciplined, part-time cavalry who attacked with sabres killing 18 and wounding at least 600, including many women who were specifically targeted. 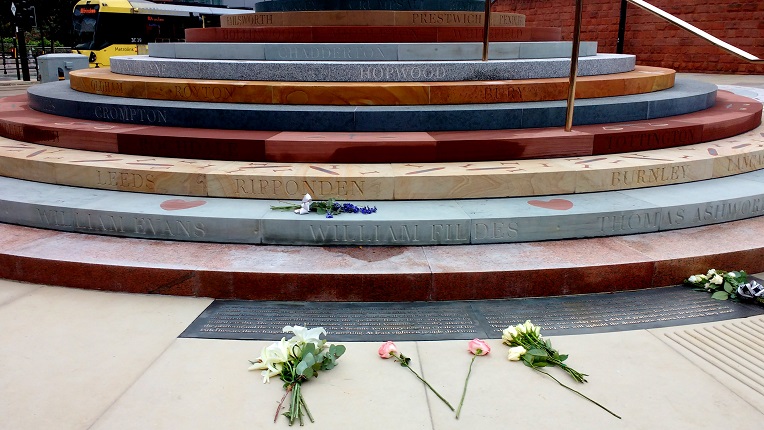 Ripponden is mentioned on the memorial

It has taken Manchester 200 years to provide a substantial memorial, designed by Jeremy Deller, to be located on the site. Engraved on the memorial are the names of the victims and above these names are the towns where the wounded, and others came from: Stockport, Oldham, Rochdale etc. as you’d expect, but one place name is unexpected… RIPPONDEN. Records state that William Slater, from Ripponden, had his ‘shoulder much bruised by the constables.’ It seems he had a lucky escape. So, who was William Slater and can we find out more about him? Does he have descendants still living in the area?

The Road to Peterloo tells the story of one of the most notorious incidents in British labour history – the ‘Peterloo Massacre’ in Manchester in 1819 – through some of the many broadside ballads that were printed around the time of the event. Laura, Brian and Pete present a trove of freshly-discovered material, with ballads sourced from Alison Morgan’s new book on the broadsides of the day, and from their own research, with many set to original tunes. Between them they offer three fine voices and instrumental skills on concertina, melodeon, bouzouki, guitar, cello and banjo, and add to the mix period dance music from the Manchester area.
Road to Peterloo CD

REVIEWS – “The Road to Peterloo”

“These songs may be 200 years old but they still have the power to shock, amuse and inspire, especially when handled as empathetically and powerfully as by this trio of musicians.” Tykes News

“An ambitious and stirring undertaking that shines an uncompromising light on a still under-represented part of the people’s history.” Songlines

“The three participants make a fine team, they are already individually renowned for their keen research and musical expertise” Living Tradition
Read the review of the CD by Dave Kidman in the Living Tradition magazine HERE

“It is brilliant!!!” Broadstairs Folk Week

“Thank you so much – it was a blooming brilliant event!” Manchester Central Library

Find out more about ‘The Road To Peterloo’, the concerts, the CD & reviews on www.theroadtopeterloo.com

CD’s (which come with extensive liner notes) are £10 + £2 postage (for within UK), £4 (to Europe), £5 (to rest of world).
To purchase a copy of the CD, please visit the Road to Peterloo discography page.
Or, if you would like to order and pay by cheque, then please make cheques payable to Backshift Music, and send along with your name and postal address to:

I’ve been asked for the words of the songs on the “Road To Peterloo” CD. You can download them from the links below:
The Triumph of Liberty
Arise, you Sons of Freedom
The Drummer Boy for Waterloo
The Weaver’s Sweet Home
Jone O’Grinfield
Cropper Lads
Tom Paine
You Tyrants of England
Spotted Borders
With Henry Hunt we’ll go
Rise, Britons, Rise
John Stafford’s Song
St. Ethelstone’s Day
The Pride of Peterloo
Chartist Anthem
Kersal Moor

World Listening Post – a New York-based music site – has reviewed “The Road to Peterloo” in March 2020. Read The Review at The Listening Post.
World Listening Post covers music from around the globe. Since 2015 the site has published review of albums from 85 countries and been viewed by readers in 160 nations.